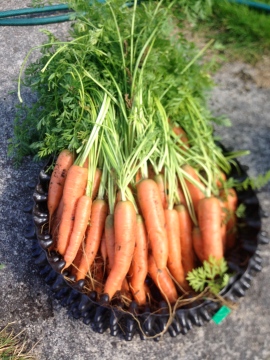 July and August is when lots of the crops in pots start to yield good pickings. The thing I am most excited about is the amount of carrots produced in one 20 litre Air-Pot (3.2kg / 7lb). The seed was sown in Spring in a shed, which meant the soil temperature was  warmer and drier;  once past the early vulnerable stage the pot was left outside and well watered. I did not even thin the seedlings which would have given each root room to grow bigger. They seemed to reach a useful size despite the overcrowding and best of all the carrots were absolutely perfect with no carrot root fly damage or forked roots. I have immediately followed this success with a late sowing and in future will aim for a succession of carrot pots.

The runner beans in a pot are looking good and producing pods. Many beanstalks can grow huge and require substantial supports, which is awkward in a pot and liable to blow over, so I selected a dwarf variety named Hestia which has been very well behaved reaching only 60cm in height. About a dozen plants in a large Air-Pot with a few sticks for support have been covered in pretty red and white flowers for weeks and will now give plenty of beans for the kitchen. It is easy to end up with a glut of runners and as they are not something I love enough to freeze  it is quite a relief to just have a potful rather than a wigwam load. 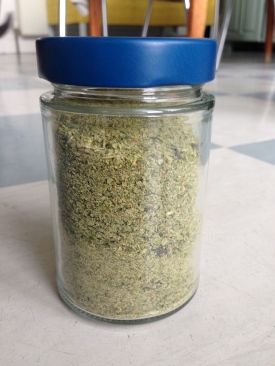 There is so much fresh growth on the Air-Pot herbs I thought it would be good to preserve some as a herb salt, I gathered a big bowlful of mixed herbs; oregano, chives, sage, rosemary, lovage, tarragon plus some chilli, celery, lemon zest, spring onion, seaweed and garlic granules. This was all dried, ground and blended with salt to make a tasty flavour enhancer.

Once again the hydrangeas on the doorstep are a mass of pink, they are several years old and are now thriving in the 20 litre size Air-Pot. They could be potted-on into the 38 litre extra large size but they then become rather heavy to move, It is nice being able to easily shift the pots into a prominent position when they are at their best, I find the 20 litre (large) is most useful when juggling pots, the 38 litre (extra large) good as a final home. Sometimes you have to concede that a plant is just too big to contain, my banana plant grew so quickly in a series of Air-Pot containers that eventually it outgrew the extra large size and was planted outdoors in the ground, it is now over 3 metres tall and has survived a Scottish winter.

2 thoughts on “Season of Plenty”