The crops-in-pots are mostly still growing apace but not quite ready to harvest. There are plenty of green tomatoes, some of them rather strange shapes, but not many ripe yet. 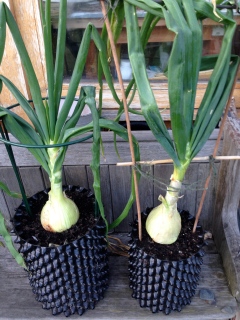 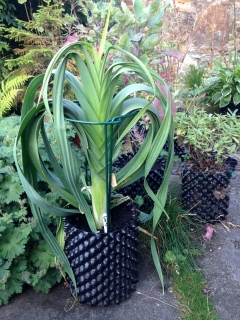 I am pleased with my onions and leeks in Air-Pot containers, they are bigger in these pots than similarly treated plants in the ground. Giant veg growers produce monster Air-Pot grown onions and this year Mark Shepherd is quietly confident of a world record.

Flowers are being produced in abundance, my agapanthus has filled out nicely and thrown up flower stems for the first time. It split its previous pot and seems to be much better now those vigorous roots are air-pruned.

My hydrangeas have put on a good display despite having been in the same rather small pots for three years. One edible that has just started to yield useful crops are the blueberries, and the mixture of varieties should continue to ripen right through August. The Air-Pot grown bushes have been in large containers since the beginning of the year and look set to crop very well. For the first time some will have to be preserved.

A pair of blackbirds have been helping themselves a bit too freely so nets have had to be deployed.