The worst of the winter is past, just about all the stored vegetables are eaten and there is not much to pick in the garden. This time of year used to be known as the Hungry Gap. Extra early crops are especially welcome as they shorten this gap, which is why I try to get a few potatoes ready a little earlier every year. Last year we opened an Air-Pot potato tower at the end of May and got a useful crop. This year I’m hoping to have some ready even earlier. The plants are already well grown in the greenhouse and should survive as long as horticultural fleece is thrown over them on cold nights.

Some ornamental perennials are coming to life including hostas in pots, I was amazed at the solid mass of roots of the old plant I saw when re-potting and dividing last year. After just one season the roots of the re-potted hostas had already completely filled the new pots and were following the pot walls in layers. So, a prime candidate to benefit from the air-pruning achieved in an Air-Pot. 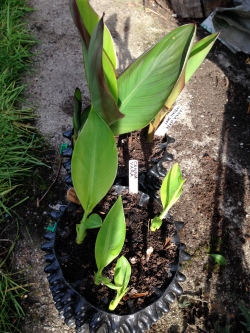 Along with other vigorous rooted plants, like agapanthus, canna and banana, I want to see if air-pruning keeps them happier for longer in a pot. It seems logical that terminating the growth of roots by air-pruning, leading to more branched roots, is better than allowing endless circling and the roots growing layer upon layer around the side or base of a conventional pot. A couple of canna in little 3 litre Air-Pot did well last year and apparently these flower better when they are not over-potted, so they will stay in these for another year.Likewise the agapanthus is being contained by its Air-Pot, this had actually burst its old pot, the new leaf is looking lush. We will see how both these flower this season.

Also lush and pristine is the new growth of the chives, unlike plants which cope with constrained roots, alliums seem to respond well to rich soil and a generous root run and they like good drainage. So I’ve put a little self-seeded clump into a big Air-Pot, lovely Spring greenery close at hand by the back door and hopefully a good show of purple pom-poms this summer.