After the early potatoes came out of the Air-Pot potato towers in July I decided to try to get a second crop. I was doubtful these late planted potatoes would be ready before winter but gave it a try using seed potatoes I had knocking about. The plants developed well despite being in a rather shady corner, and in late October we opened the pots to find a very decent crop of main crop Rooster potatoes. A very worthwhile way to get great yields from small spaces and something I will do again. 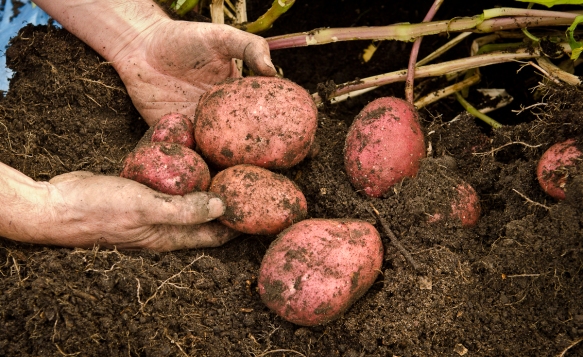 Next year I will be more organised and make sure I have seed potatoes of an early variety saved ready for the second planting. Earlies need less time to develop than main crop so will definitely be ready before the colder weather. I will also be a bit quicker to harvest the first crop, possibly lifting them in June. If the second planting is out of the pots quite quickly, say by the end of August, it might even be worth trying for a third planting! I’ll probably just have pots full of confused potatoes trying to grow in winter, but with a bit of protection maybe I’ll have new potatoes in December?